The Allies used Enigma decrypts and the Double-Cross System to shape long term plans for the war, which contributed to a definite victory.

As Bletchley Park decoded increasing quantities of Enigma messages, Churchill came to rely on them as a central point to his strategy. 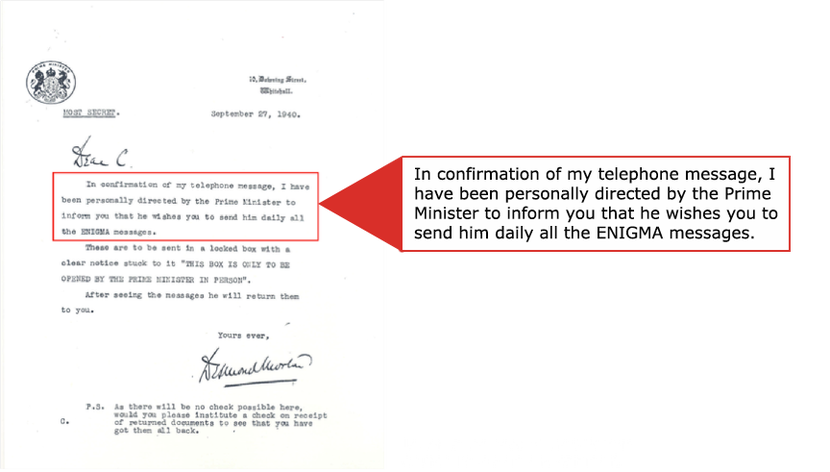 "[Ultra] indicated options and, often, the relevant advantages and hazards of each... The ability to persist in strategic decisions depended largely on what could be ascertained about the enemy's degree of awareness and counterpreparations"
- Dr. Harold C. Deutsch, expert on the German military

"We know that Churchill 'revelled' in his ability to read Hitler's mail and spent hours pondering on Nazi strategy as revealed in the decrypted messages"
– Thomas R Johnson, NSA historian

Enigma decrypts provided information through which the Allies found, turned, and monitored German agents that sent the Germans false information, making the Double-Cross System possible.
"By means of the double-cross system, we actively ran and controlled the German espionage system in Britain."
- J. C. Masterman, chairman of the Double-Cross System
Click on the numbers below to read a supporting quote for each step of the Closed Loop System

“Three rotors, side by side, created an electrical maze. As they turned, they changed the maze - and thereby the encipherment. The result was a rather secure cipher”
- Dr. David Kahn, leading historian

“Bletchley Park was concentrated on deciphering, translating, evaluating and distributing the vast amount of information...transmitted by the Germans after they had been rendered 'secure' by encipherment on the famous Enigma machine”
- Ronald Lewin, British military historian

"After the war, it took over from the Government Code and Cipher School the function of receiving and decoding intercepted wireless traffic from listening stations scattered throughout the United Kingdom and from several dozen overseas"
- Lord Jonathan Sumption, British judge, author and medieval historian

"For the duration of the war, brilliantly orchestrated false reports sent back to Germany by Masterman's tame agents would lead the German high command into one blunder after another at the most crucial junctures - ensuring the success of the Allied landing at Normandy, helping to turn the tide in the war against U-boats in the Atlantic, even tricking the Germans into firing most of their V-2 rockets short of central London"
- Stephen Budiansky, former national security correspondent, foreign editor, and deputy editor of U.S. News & World Report

"COMINT is technical and intelligence information derived from foreign communications by other than the intended recipients"
- Department of Defense Directive, 2010

“A standard analogy for public-key cryptography is given as follows. Suppose that Bob has a wall safe with a secret combination lock known only to him and the safe is left open and made available to passers-by. Then anyone, including Alice, can put messages in the safe and lock it. However, only Bob can retrieve the message, since even Alice, who left a message in the box, has a way of retrieving the message.”
- Richard A. Mollin, author and professor